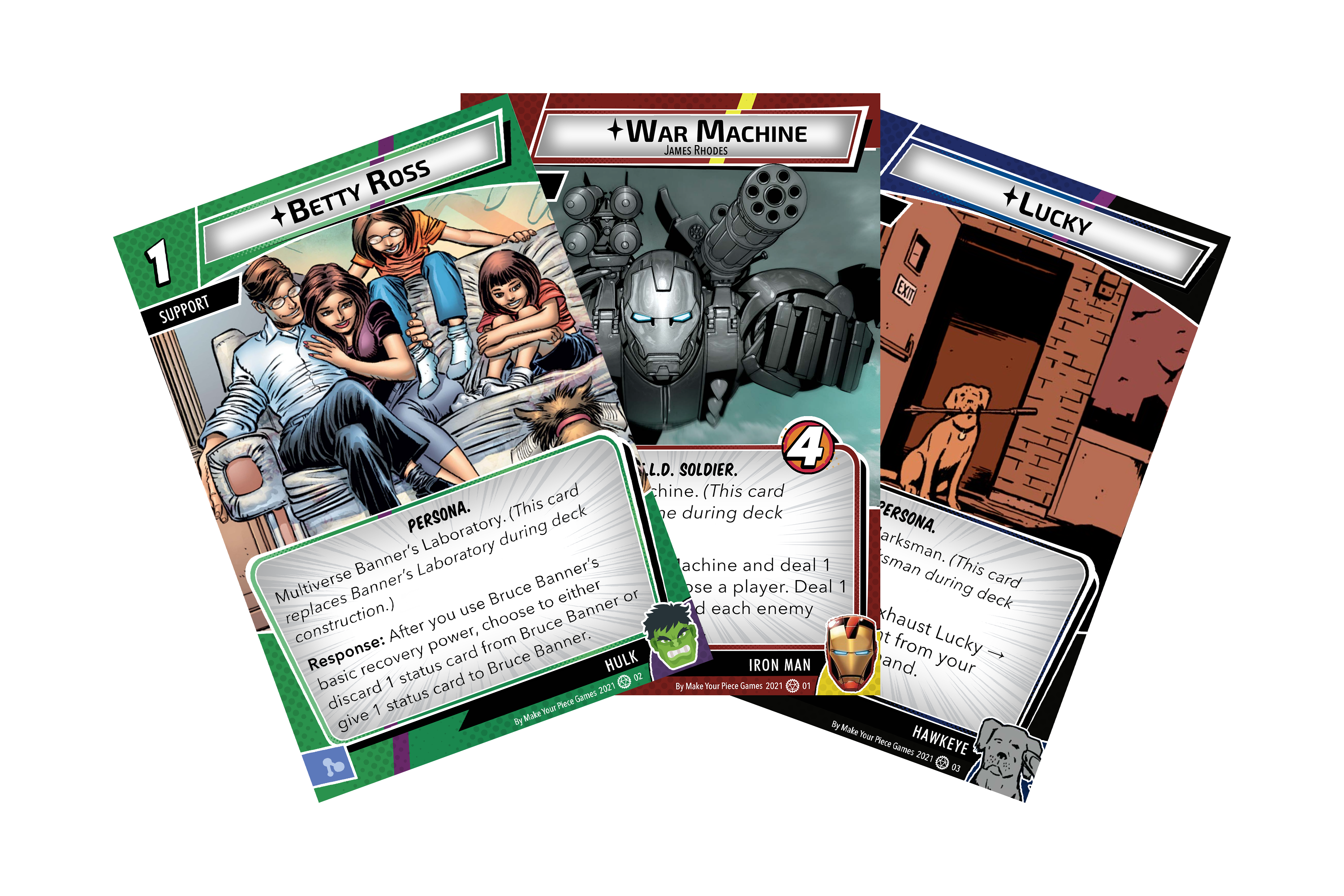 We’re over a year into the game, and I know I’ve seen a slew of cards that just don’t stack up against their competitors during deck building. In general, this means they just sit in the box. But what about an identity’s signature fifteen cards? With no stock way of replacing them, I set about implementing the multiverse keyword to see if I could remedy the situation. If you want to check out my first homebrew attempt, check out my Hydra’s Most Wanted MCU-based modular encounter set.

So, what is the multiverse keyword? In short, it’s a means for replacing one of a character’s signature 15 cards with an alternate version. For this first batch, every card will replace a card with a specific name. With some iteration, thanks to the folks on the Marvel Champions Discord, the concept is a bit future-proofed in case we want to get a bit funky down the line.

The Card that Started it All: War Machine

Stark’s signature War Machine gets a lot of hate. And honestly, I think it’s entirely warranted. It feels bad to have a signature card reduced to a very verbose resource card most of the time, so Rhodey is up first on the multiverse keyword train.

My goal for the inaugural multiverse venture was to keep the feel of the original card, but bring the values in line with other signature allies. Looking at some of the more recent signature allies shows us a relatively consistent valuation of attack or thwart. Generally, you’re going to get double the cost in one of those stats. For example, Ant-Man’s Wasp will give you 2 activations, before they chump block, at 2THW or 2ATK and an “enters play” ability for another 2. Rhodey isn’t great at thwarting, so I settled on balancing around damage instead. Easily enough, reducing his cost by 1 brings him in line on this stat.

The bigger issue to resolve with a multiverse War Machine is his ability. In his stock form, you’re trading 2 basic activations for 1 damage to each enemy. To break even on this, you need to hit 4 targets, which is a fairly high bar in lower player counts. Reducing the cost to one damage sorts out that problem, but now he’s too good in high player counts. To curb this, he now has to target a single player’s enemies. Ultimately, this lowers his top-end damage but normalizes his low-end damage.

Depending on who you ask, Hulk’s kit has a lot of issues. My goal with the multiverse keyword wasn’t to try to fix the entire kit, necessarily. I did, however, feel that Banner’s Laboratory feels like a cold inclusion in his signature set. Back when Hulk was just coming out, I created an alt-art version that swapped the lab for Betty. I took that a bit further by developing this new ability.

The design goal here was to give Hulk a real incentive for flipping to alter ego. Hulk will do whatever it takes to protect Betty, and I leaned into that ethos for the new effect. So, multiverse Betty Ross can help Banner shake off a negative status, or steel himself against an incoming attack. It doesn’t require exhausting Betty, so if we get ways to ready an alter ego, you could use this multiple times a turn. Pretty strong, but Hulk could probably use it.

I’ve been pretty vocal that I wish the Hawkeye hero had been a little more Fraction and a little less MCU. So, like the previous card, my goal here was to warm up the kit by swapping out one of the more lifeless cards, Expert Marksman. In this multiverse, you can swap out one of Hawkeye’s resource generators for Pizza Dog and his ability to fetch arrows from your discard.

Balance-wise, this one is probably a little weaker than its original counterpart. Only being usable in alter ego makes sense but imposes a limit the original didn’t have. On the other hand, being able to retrieve spent arrows gives you options that could really save your neck if you’re backed into a corner.

Here’s a link to download the entire set, including the keyword reference card. The download includes copies with bleed if professional printing is your jam. If you’ve got any ideas for more multiverse cards, let me know via the contact page.

Thank you to all our Patreon supporters who help making this content possible, especially: