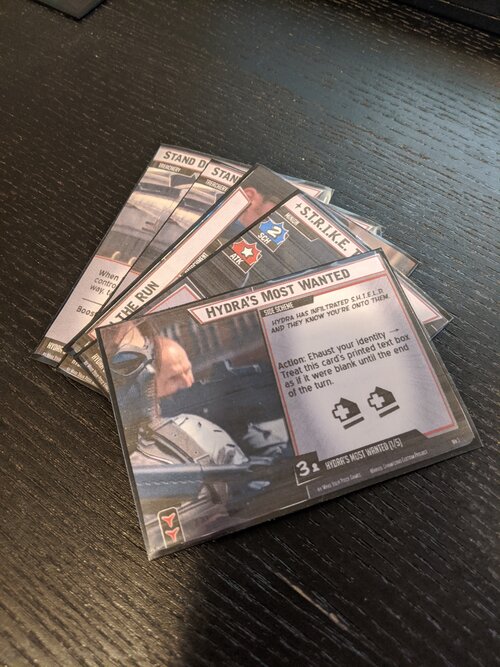 I’ve been playing a ton of the Marvel Champions LCG in the past few months. During the ongoing quarantine in my neck of the woods, most of this has been solo. Unfortunately for me, and many other faithful fans of the game, upcoming expansion content for the game has been pushed back. In an effort to squeeze some more fun out of the game, I decided to start developing some custom content for the game.

For the purists out there, don’t pull your hair out, but I went with a movie for inspiration. I’m sorry! I didn’t grow up on Marvel comics. I watched the Spider-Man and X-Men cartoons, but never really got super into the comics. As an adult, the MCU has enthralled me. And yes, now that I’m hooked, I have started reading comics on Marvel Unlimited as well.

I started over on the discord server dedicated entirely to home brew content for the game, where you can find some awesome Photoshop templates. Then it was just waiting for inspiration to strike. Luckily, it didn’t take too long, and I started fleshing out a modular encounter set based on Captain America: The Winter Soldier. I wanted to capture the feeling of the heroes going on the run, watching their backs, and slowly getting beaten down by their pursuers. The modular set consists of a side scheme, a minion, two treacheries, and an attachment. One of the overarching elements is indirect damage. This give the players the option of splitting the damage to allies, thematically stripping the heroes of their closest friends.

The titular side scheme, Hydra’s Most Wanted offers the players a bit of choice. They can continue to lie low and let it tick up the threat on the main scheme with two acceleration icons, or they can spend their turns exhausting to ignore the effects. It comes into play with 3 threat per player, so it’s not especially quick to just burst down. In my play testing, this card is a pain when it comes up, but not insurmountable by any means.

For our minion, we have the S.T.R.I.K.E. Team. This elite squad consisting entirely of Hydra operatives will pursue you endlessly. Again, the players have choices about how this card is going to hurt them. Each activation, the minion will deal out 3 indirect damage. Unfortunately, it also stuns any character that takes this damage. While the players have the benefit of splitting up the damage as they see fit, they essentially have to pay for it with future attack actions. Thematically, it makes sense for a team of gunmen to be able to hit multiple targets. A team adept at subduing targets ties in perfectly with the stun effect in game.

Treachery wise, we have two copies of Stand Down. Surprise, surprise, the players have more choices here. Exhaust a character or take indirect damage. These are probably the most straight forward cards in the set, but for a little more pain, they have the boost effect of exhausting a character as well. Nice and simple, but another instance of adding some decision space to the game.

The last card was the one I spent the most time on. I wanted On the Run to feel exactly as the name implies. It had to provide pressure and expand the decisions the players have to make on their turns. This attachment comes into play attached to a player’s identity card with 3 counters. At the end of each player phase, they are forced to trade one of these tokens for 2 indirect damage. If this plays out all the way, this card is worth 6 damage over three turns. Considering there are plenty of encounter cards that force the villain to attack, this isn’t too severe. But the players can speed this up, and lessen the impact, by exhausting their identity to remove a token.

That wraps it up. If you want to download the set and print them out at 2.5” by 3.5”, you can download a zip file of the images here. I’d love to hear what you think!